Donald Knuth is a visiting professor here at Oxford’s Computing Laboratory, and during the brief periods when he is in residence he and I frequently use the same printer. I’ve never actually succumbed to the temptation to read his drafts while I’m waiting for my own printouts, but I’d be lying if I said I wasn’t tempted.

Several months ago, he gave a seminar here about his latest work on the next volume of The Art of Computer Programming (TAOCP). I was interested in his work on ZDDs, so I read through his draft of Pre-Fascicle 1b and found some errors in the solution to one of the problems he presents. Knuth himself does not use email, however there is an email address for reporting bugs in TOACP, so I sent my message there, hoping there was a chance he might see it and say hello before leaving Oxford.

As I rather suspected, however, the claim that he does not use email seems genuine: my message seems to have been put to paper less than three minutes after it was sent. A month or so after my message I received an email from his secretary requesting my postal address. (I had actually included this in my original message, expecting him to reply by post, but the secretary apparently missed it.) A few weeks later I got my response: 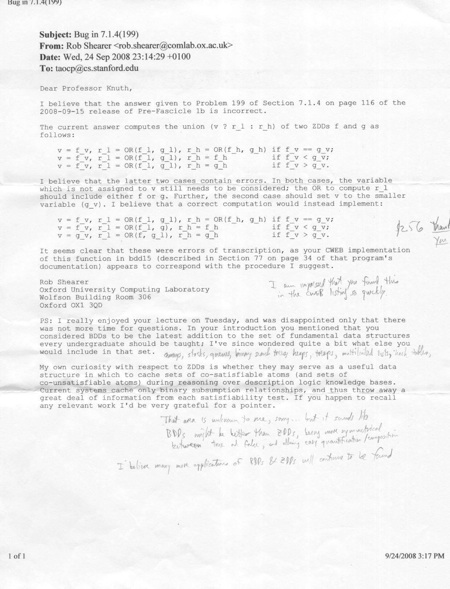 Included, of course, was one of Knuth’s famous reward checks:

I was hoping that mine might be the first reward check from the Bank of San Serriffe, however even the example listed in Wikipedia has a smaller check number. It was written on the same day, but apparently with a different pen.

Knuth made some very nice comments on the printout of my email. I am, however, quite insulted that he has chosen not to follow me on Twitter.